Mirrors and the Ancient Maya

The ancient Maya civilization, like other Mesoamerican civilizations, used pieces of iron ores to create shiny flat surfaces -- archaeologists call these artifacts mirrors. These mirrors, for the ancient Maya, were symbols as well as tools. One thing its thought mirrors were a symbol of was either the northern part of the sky when it was night or the North Star. They were also a symbol of ruler's rightful power, royal lineage, and sunlight.


The Mirrors
The ancient Maya liked to make their mirrors with minerals that are types of iron ore and slate. (As to what kind of iron ore, you may see that it said that the Maya just used pyrite, or used other kinds too, like pyrite.) They polished the iron ore and made them into a mosaic. A lot of mirrors have at least one hole near an edge.

For the backing of the mirror, they preferred to use slate. (The Maya also made wooden backings and ceramic backings.) There were times the ancient Maya decorated the visible side of the backing.

Consideration: Mirror Holders Found?
A few wooden sculptures have been found that might have been holders for mirrors. These possible holders are shaped like people with dwarfism. (The ancient Maya may have seen dwarfism as representing an "in between" state.) Below is an image (from the Metropolitan Museum of Art's website) of one of these sculptures, which you may have seen in other places on this blog. 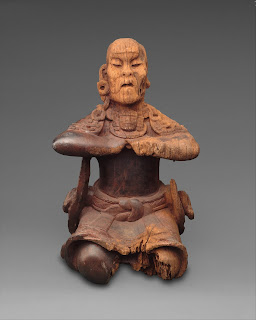 Uses
Elites may have worn mirrors -- the mirror's holes could have been used to hang the mirrors on the elites somehow.  The Maya may have used mirrors in their rituals, for when they wanted to make smoke or fire -- possible evidence for this are mirrors taken from the site of Chichén Itzá that were burned. They also used mirrors as tools for telling the future. You may also see the view that mirrors were for communicating with supernatural beings, and that doing this made the person using the mirror divine.

There's an idea that royalty had a ceremony that concerned future rulers and involved a mirror. It's not sure what the ritual was for. One possibility was that it was part of the rituals for a new ruler who was taking the throne. Another possibility is that it was a ritual for telling everyone who was going to be the next in line.

Mirrors were also put in burials. You can find them in elite tombs -- more in the highlands than the lowlands. (They're not common in the lowlands.)

Gods Connected with Mirrors
Archaeologists have found that the Maya drew some of their gods with mirrors on their foreheads. One god is known today as god C.  A monkey god, this god's name was an "animated" version of a mirror glyph. This god was connected with rulership. The Maya drew him with a mirror in his forehead.

K'awiil (also known as god K) also had a mirror drawn on his forehead. And, also like god C, he was a god that had a connection to rulership.

In the highlands of Guatemala is the deepest lake in Central America: Lake Atitlan. More than one site has been found in this lake, including Samabaj. Discovered in the 1994, this site has been likened to Atlantis, due to how it may have ended up in the lake. Samabaj even got noticed by National Geographic, which made a documentary on it.

Location
Samabaj is located in the southern part of Lake Atitlan (itself located in the Sololá Department) about 40 to 82 feet below the surface. (It changes.) Before it was submerged, the site was on an island. It is north of another site called Chuk'muk, which is on land.

Discovery
There are differing accounts on Samabaj's discovery. The account in Arqueología Subacuática  says that it was discovered in 1996 by Robert Samayoa Asmus.

In 1994, he had found an artifact (a vessel) and decided to see what all he could find -- he came to think that there had been a community that was now under the lake. Two years later, he found the site. Four years later, he got the site registered as an archaeological site.

Name Origin
Samayoa is the creator of the site's current name: Samabaj is a mix of Samayoa and "abaj" -- "stone" in more than one Mayan language.

It's possible that Samabaj was an important Preclassic Period community for the basin that the lake is located in. Based off of artifacts found (including the remains of people's houses,) the site was not only a place where people lived, but was also a place for religious pilgrimage. It may have been important during the time when another site, Semetabaj (which had enjoyed power for a time) was no longer a living community.

Samabaj's life as a community ended around the time the Preclassic Period was ending/when the Classic Period was beginning. That is, around 300 AD, the lake rose over the the land that Samabaj was built on -- a natural disaster may have been what made the water rise. (One possibility is a volcano erupting.)

Where did the people go? It's possible they went to another site: Chuk'muk. Around the time the Classic Period began, Chuk'muk got bigger -- and it may be because the Maya of Samabaj moved there. (Speaking of Chuk'muk: interestingly, in this period it became an important community in the basin that Lake Atitlan is in.)