The Moon and the Ancient Maya 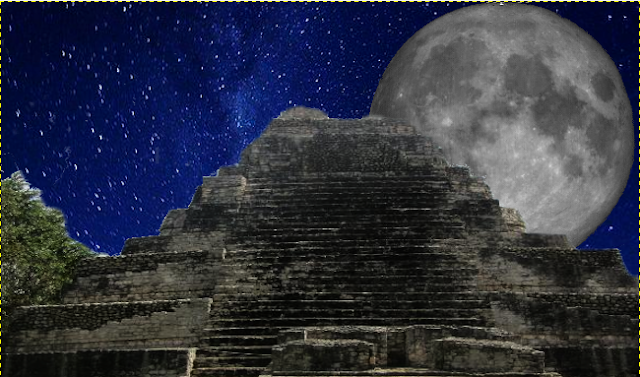 The moon had lots of meanings for the ancient Maya. This civilization's people studied its path. It was a part of their religious beliefs. They included their observations of its passage in the inscriptions of their monuments. The moon was even thought of as a deity. Let's learn more, shall we?

Tracking the Moon
To see the moon in the same phase twice, you need to wait about 29.53059 days -- or 29 days, 12 hours, 44 minutes and 3 seconds. This cycle is called the synodic month, and the ancient Maya studied it. (It's possible they also tracked how long it took for the moon to reach the same stars it had already passed -- this is called the sidereal cycle.)

It seems that to get around having to use fractions, the Maya would calculate the synodic month using a cycle made of groups synodic months. Different places in the Maya area had their own way of tracking this cycle. For about 70 years though -- from 687 to 756 AD -- they tried to use the same method. (This period of time is called the Period of Uniformity, today.)

Time passed and the Maya started to use a new cycle, which looks like it started at Copán. The new cycle was made of 4,400 days. It had 149 synodic months. This makes about 29.5302 days for every synodic month -- even closer than the Palenque system.

Which phase of the moon did the ancient Maya see as being the beginning of the synodic month? It seems there was no standard starting point. One theory says it may have been the first night when they could see the moon again, which would have depended on a site's location.

As you may know, there's been no evidence that the ancient Maya had a standalone lunar calendar. Starting in the Classic Period (around 250 AD/300 AD to 1000 AD), the Maya did start using a group of glyphs that people today call the lunar series. The Maya used the lunar series in the inscriptions on their monuments. In these inscriptions, the Maya tended to put the lunar series before the Haab' day of the date they were calculating.

The glyphs in the lunar series are known as glyph E, glyph D, glyph C, glyph B, glyph A and glyph X. Here's one view on what the glyphs mean:

•  The first two (glyph E and D) state the moon's phase from a starting point in the synodic month. When the moon was less than 20 days old, glyph D was used. When it was 20 days (or more) into its cycle, the Maya added glyph D to glyph E.

• The third (glyph C) is actually a cycle of numbered glyphs.  Each glyph C was a moon cycle, so altogether the cycle of glyph C lasted 177 days. Whether this cycle was used for a past or present moon depended on the site.

•  The fourth (glyph B) emphasizes what the sixth glyph (glyph X) said. One possible translation is "is its holy name." Another translation uses "youthful" instead of "holy."

• The sixth (glyph X) is also a cycle of 6 glyphs. These glyphs might be names for whichever one of glyph C is being talked about in the inscription.

Buildings Connected to the Moon
The ancient Maya built different structures that were used to help them study the moon. Not all of the structures were built with exactly the same purpose -- here are some examples.

One example of a structure made to study the moon is a pyramid at the site of Edzná, which you may see called La Vieja. La Vieja was (or at least possibly was) built as a marker for the farthest point the moon sets in its movement north within its cycle at Edzná.

A second example is a building (structure 10K-2) at the site of Xultun in Guatemala. It has murals on its walls, including glyphs that look like they were for charting the moon. These glyphs were made in the 800s AD.  It looks like the glyphs were for working on the math for the lunar series (specifically on glyph C.)

A third example is the structure known today as the Caracol (this is Spanish for "snail.") This structure might have been an observatory -- part of what the Maya may have used it for was to track the moon.

In the Postclassic period, it looks like the moon is only shown as a goddess. Some sources say that two Postclassic beings, goddess I and goddess O, were moon goddesses. However, this theory has become questioned -- it may be that just goddess I was a moon goddess (or at least somehow connected to the moon, as well as fertility.) But it might also be that the only place that you can find evidence of the real moon goddess in the Postclassic Period so far is on page 49 of the Dresden Codex.

Consideration: Sun as the Moon?
The Maya believed in a god now called the Jaguar God of the Underworld (among other names) by archaeologists. This god may have been the sun at night or "night sun" or perhaps a fire god..

University of Virginia: Astronomy 1210 (O'Connell): Introduction to Astonomy: Notes on the Maya

"Beyond the “Dresden Codex”: New Insights into the Evolution of Maya Eclipse Prediction"; Vincent H. Malmström

NASA: Eclipse and the Moon's Orbit

"The Role of Archaeoastronomy in the Maya World: the Case Study of the Island of Cozumel"; 2016