Avocados and the Ancient Maya

Scientifically known as Persea americana, you may also know the avocado as the avocado pear or the more surprising-sounding alligator pear. Avocados (which grow on trees also called avocados) were in part domesticated by the ancient Maya, who used it in their diet -- and more.

Avocado in the Maya Calendar
The 14th month of the Haab', or solar calendar, was connected to avocados. The main part of the glyph was the glyph for avocado, which currently is thought to have been pronounced as "un." (On a related note, possible names for this month glyph are Uniw and Uniiw -- though you may have heard it called K'ank'in.) Below are drawings of K'ank'in as seen in a work by Sylvanus Griswold Morley called An Introduction to the Study of Maya Hieroglyphs. 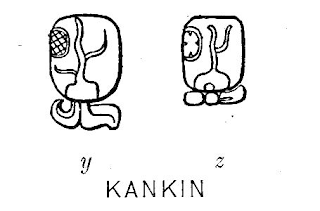 In Religion
There was a belief among the ancient Maya that people who had died could come back as fruit trees -- and one such tree was the avocado. However, for this to happen, you had to have been important.

One place you can see the avocado tree in connection to a reborn ancestor is the sarcophagus of Pakal the Great (known by other names including Pacal.) Images of certain relatives of his were put on the sarcophagus, each one drawn near a fruit tree. Ix or Lady Yohl Ik'nal's (known by other names such as Lady K'anal-Ik'al and Lady Olnal) image is associated with an avocado tree.

The ancient Maya also had sacred groves, and they saw avocado trees as a worthy species to have in them.

Consideration: As a Place Name
In what is now Belize, a city-state seems to have been connected very strongly with the avocado. The name for this city-state -- or perhaps Pusilhá, one of its capitals -- included the glyph for avocado as its main part. In English, you may see Pusilhá called the Kingdom of the Avocado.

Project Gutenberg: "An Introduction to the Study of Maya Hieroglyphs"; Sylvanus Griswold Morley; 1915